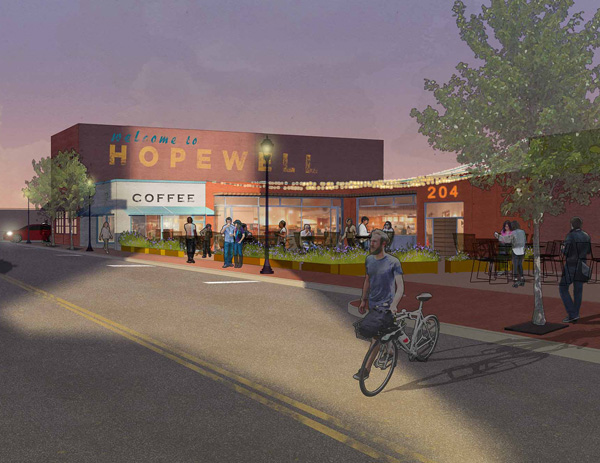 SGA was retained as part of a team to create a brownfields redevelopment plan for the City of Hopewell, Virginia as a component of a U.S. EPA funded Brownfields Hazardous and Petroleum Assessment project.

SGA developed plans for a residential neighborhood and for the historic downtown of the city, which includes a large riverfront park. Brownfield sites ranged from former auto dealerships to dry cleaners and small-scale industry that revolved around the city’s major chemical production plants. Hopewell is most noted as the location of an Allied Chemical contracted plant (now Honeywell) that produced Kepone, a pesticide that was banned in the U.S., and was the subject of an extensive legal suite in the 1970s, that result of the extensive pollution in the James River and a ban in all fishing south of the City of Hopewell.

The plan developed by SGA focuses on using parks and public space to facilitate both green infrastructure and economic development. The riverfront park’s proposed improvements focus on a public private partnership approach by featuring an amphitheater, play-zone, and new opportunities to engage with the river as a framework to support a major new mixed-use infill development on adjacent redevelopment site. The plan includes a series of interconnected pocket parks and public spaces that lead visitors throughout the downtown. These spaces are designed as flexible, programmable spaces that can suit a variety of needs for the community while simultaneously complementing and encouraging future private development. SGA developed a strategy for creating new and in some cases temporary, public spaces that employ a tactical urbanism approach that will act as an immediately implementable catalyst for the revitalization by changing public perception of the value of brownfield sites.

The plan will re-energize the City of Hopewell by creating new opportunities for private investment and facilitate the remediation of numbers smaller and medium-sized brownfields sites scattering throughout the community.